THE EVERLASTING PLAGUE has debuted on the U.S. Billboard charts 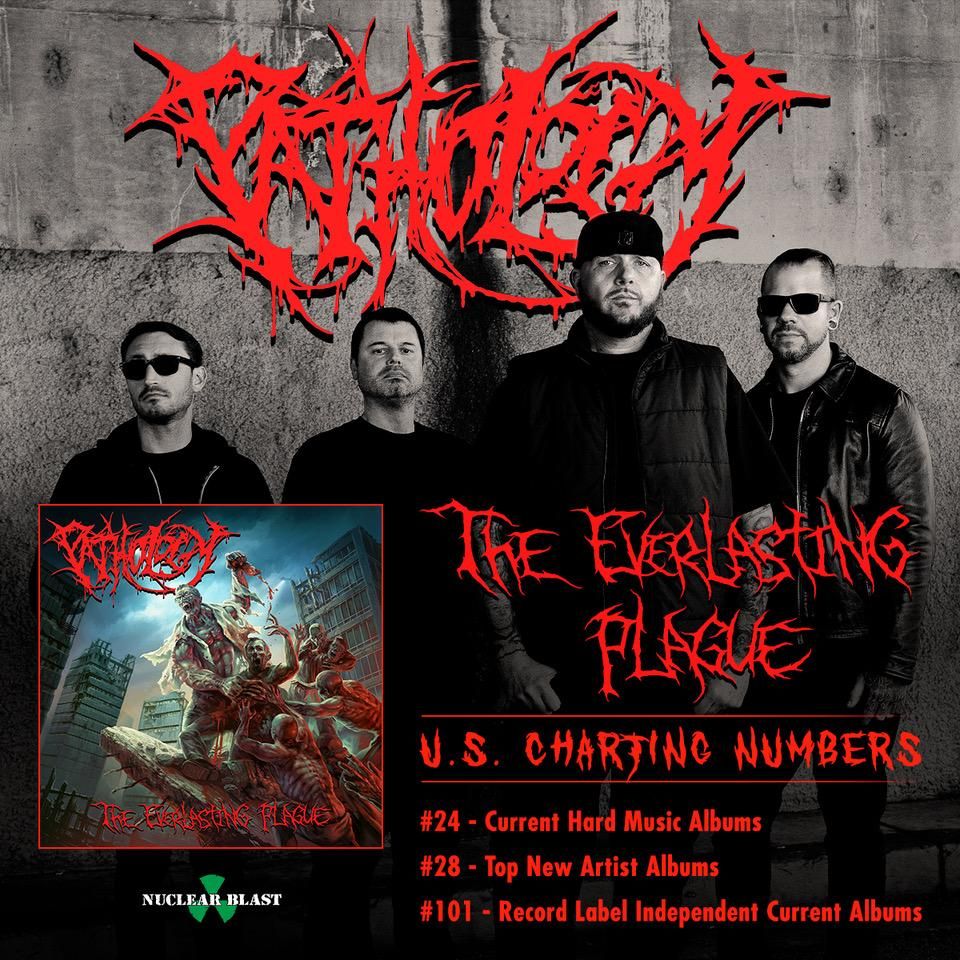 THE EVERLASTING PLAGUE has debuted on the U.S. Billboard charts at:

Thank you all for streaming / purchasing the album!

Pathology Release Music Video For "A Pound Of Flesh" + The Everlasting Plague Is Out Now!

We are very proud to release The Everlasting Plague and the new single ‘A Pound of Flesh!’ We’re all super happy with how this album came out. There are some new elements to the PATHOLOGY sound and a little something for everyone on this new album. ‘A Pound of Flesh’ definitely showcases the band’s different influences, with heavy breakdowns to dark melodies and everything in between. Go check out The Everlasting Plague now and feast on the heaviness!

Watch the full music video for "A Pound of Flesh" on YouTube: https://youtu.be/QvlCx6Zasiw

New trailer for our upcoming album, The Everlasting Plague! Here are some inside views on the production process and the songwriting of the new album, out on November 19th.

Order the album in various formats from Nuclear Blast: http://nblast.de/Pathology-TEP

About The Song "Dirge For The Infected" (OFFICIAL TRAILED)

Our vocalist, Obie Flett, discusses the single: DIRGE FOR THE INFECTED. Pre-Save the album and listen to the single: https://bfan.link/pathology-theeverlastingplague

We're stoked to finally share another track from the new album! 'Dirge For The Infected' shows the full range of PATHOLOGY's music, from brutally heavy to fast and complex along with everything in between. Take a journey with us on this new track and prepare yourselves for the new album 'The Everlasting Plague'!

The Everlasting Plague: Get To Know the Band (OFFICIAL TRAILER)

Get to know Pathology and a brief history of the band’s 15 year career in a new album trailer. Our new album will be out November 19th via Nuclear Blast.

Watch the full trailer on our YouTube channel: https://youtu.be/fRI2oe5BhZ4

Pathology Release Guitar Playthrough For "As The Entrails Wither"

Gore fueled death metallers PATHOLOGY recently announced their 11th studio album, The Everlasting Plague, to be released on November 19th via Nuclear Blast. Today, the band releases the guitar playthrough for the second single "As The Entrails Wither" which can be seen here: https://youtu.be/e-gy-Lswpmc

Gore fueled death metallers PATHOLOGY recently announced their 11th studio album, The Everlasting Plague, will be released on November 19th via Nuclear Blast. Today, the band releases the lyric video for the second single "As The Entrails Wither" which can be seen here: https://youtu.be/94umT1bQ6is

PATHOLOGY's Dave Astor comments, "We’re stoked to release our newest single, 'As The Entrails Wither'! In true PATHOLOGY fashion, this song is about a stronghold with its outer walls draped in rotting bodies as a deterrent for unwanted guests. There are lots of twists and turns in this song and we’re stoked with how it came out!"

About the Song "Engaging in Homicide" (OFFICIAL TRAILER)

Pathology’s vocalist, Obie Flett, discusses the meaning of the song “Engaging in Homicide” from their eleventh studio album, The Everlasting Plague, out November 19th, 2021 via Nuclear Blast. Listen / Order: http://www.nuclearblast.com/pathology...

Gore fueled death metallers PATHOLOGY return with their 11th studio album The Everlasting Plague which will be released on November 19th via Nuclear Blast. Recently signed to Nuclear Blast Records, the band is charged with a violent hunger to return to the road, and unleash their latest monstrous music to the masses. Today, they release a music video for the first single "Engaging In Homicide". Watch the video directed by Jeff Forrest here: https://youtu.be/-RaBrAy4UgY

PATHOLOGY's Dave Astor comments, "The band is very excited and honored to sign with one of the biggest metal labels on the planet. We are happy to call Nuclear Blast our new home! Thanks to Gerardo, Oscar, and the entire Nuclear Blast team for making this a reality. We’re taking things to the next level with the new Pathology album… Get ready!” 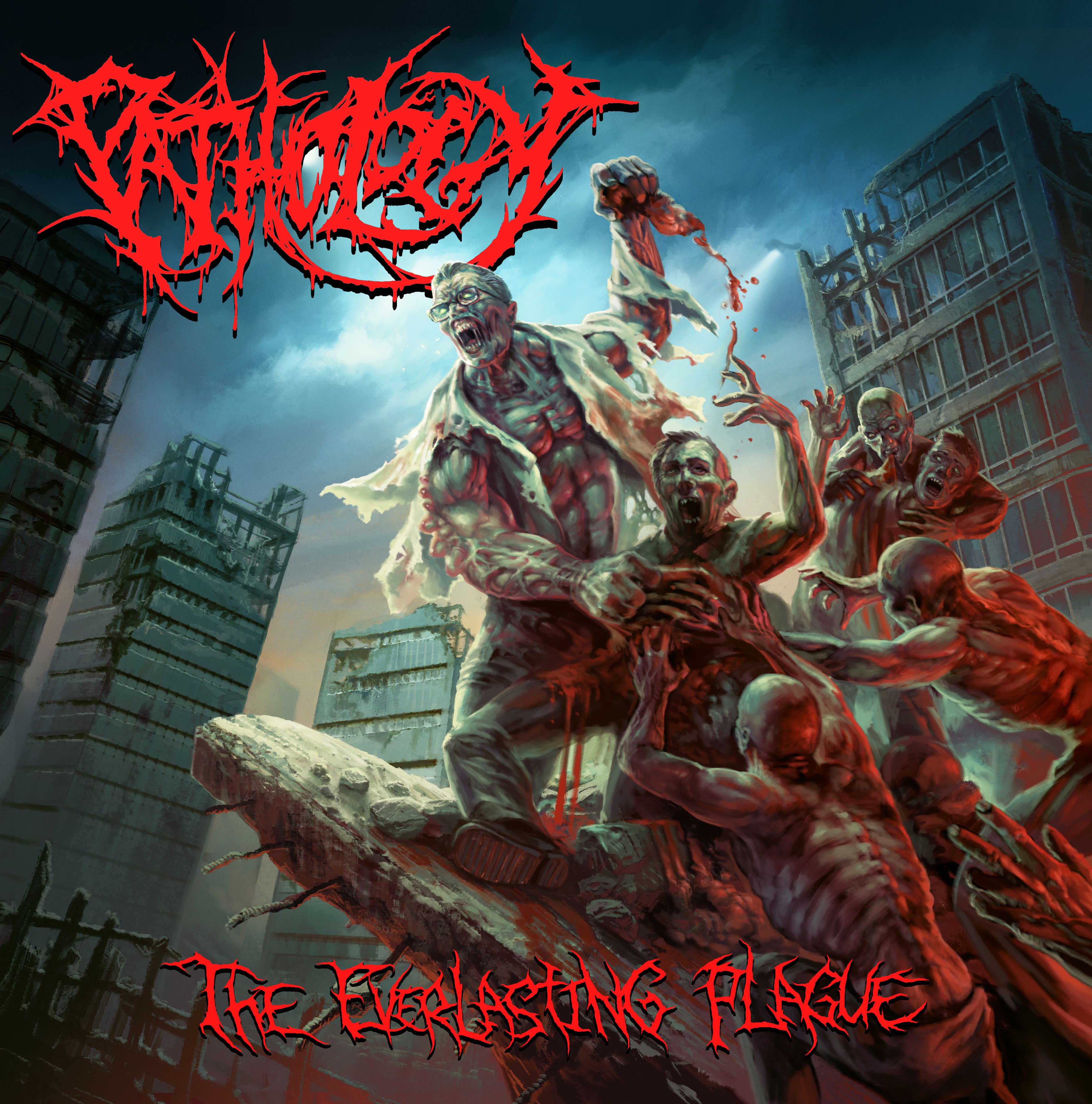 We will be playing with Suicide Silence and a special guest TBA on Sat, November 30 at Chain Reaction in Anaheim, CA. 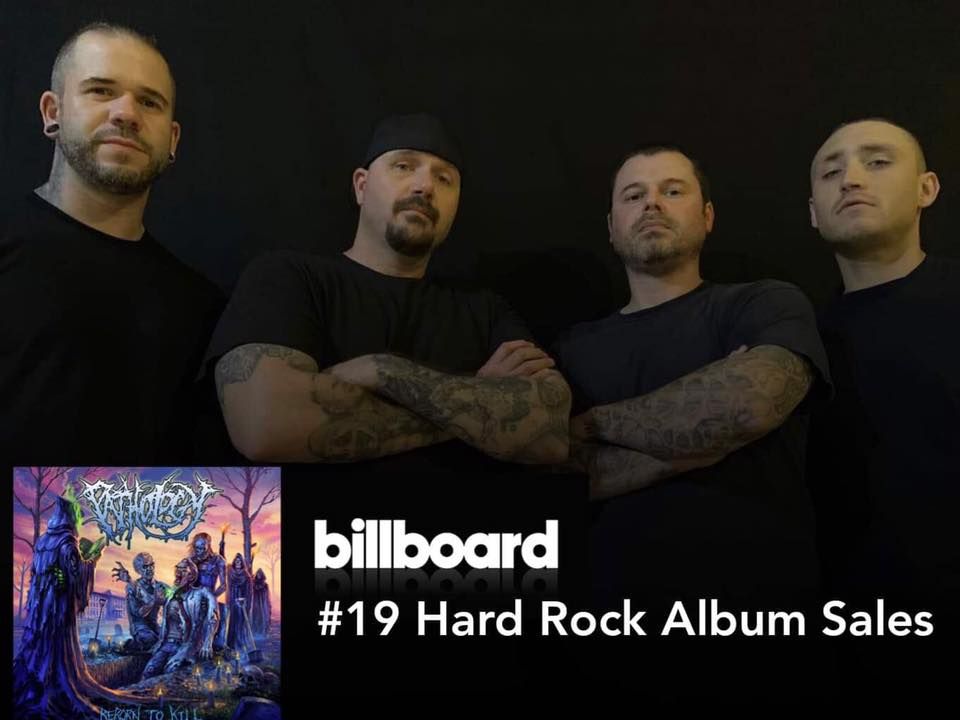 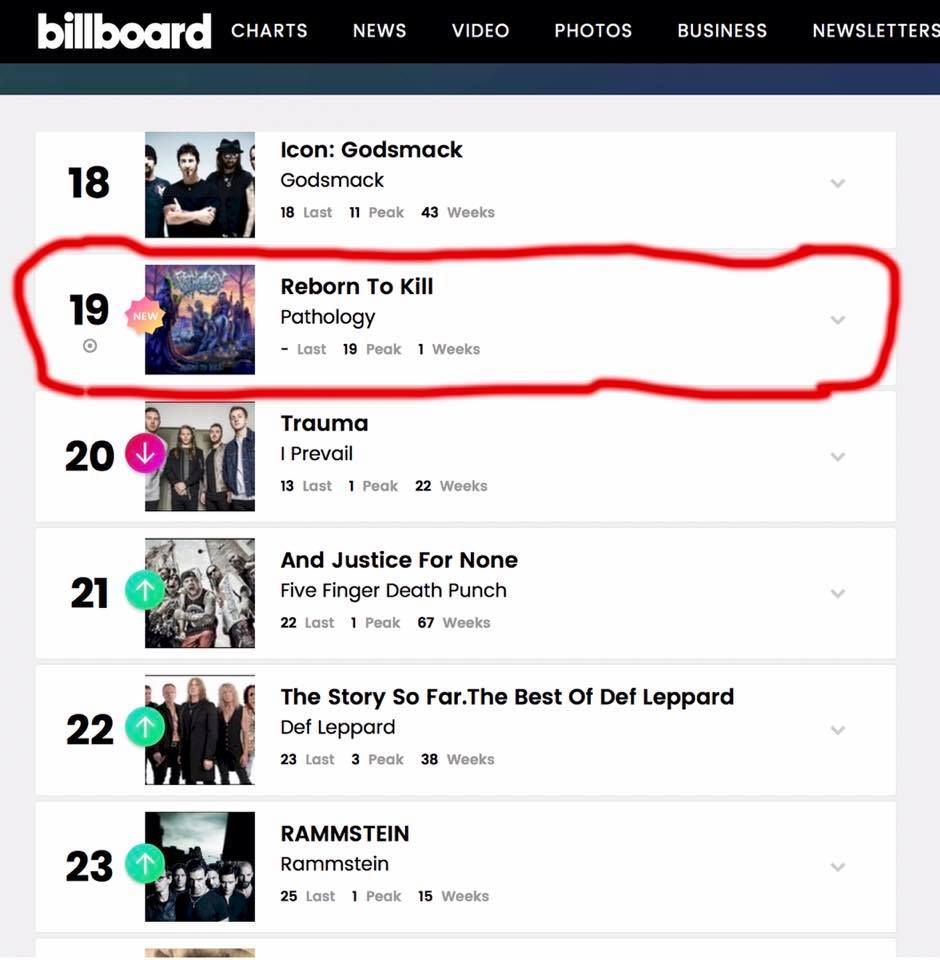 New playthrough video for “pit of bones” featuring guest vocals from Trevor Strnad of the black dahlia murder up now!

Pathology - “The Beast Within” (New Video Premiere) Reborn To Kill on Pavement Entertainment will be Available August 9th.

The song is about It's futurescape depicting a time when mans basic humanity is taken, and are reverted back to cave dwelling beasts. Reborn to kill will be released August 9 2019 through Pavement Entertainment. Pre orders are available now.

San Diego death metal band Pathology has finished recording their new album. Produced and mastered by Zack Ohren at shark bit studios (all shall parish, decrepit birth). The artwork is done once again by the mighty Par Olofsson. The album is also featuring guest vocals by Trevor Strnad of The Black Dahlia Murder.

Reborn to kill will be released August 9 2019 through Pavement Entertainment.

Dave Astor comments: This is by far the best Pathology to date. Everything came out very heavy. We added some new elements this time around and we are excited to see what everyone thinks. We also brought back the evil doctor from the dead so he can continue running his zombie army.

A new song will be available soon!

Reborn to kill will be released just in time for their upcoming tour with Narcotic Wasteland.

4 Frothing at the mouth

6 Dragged into the cave 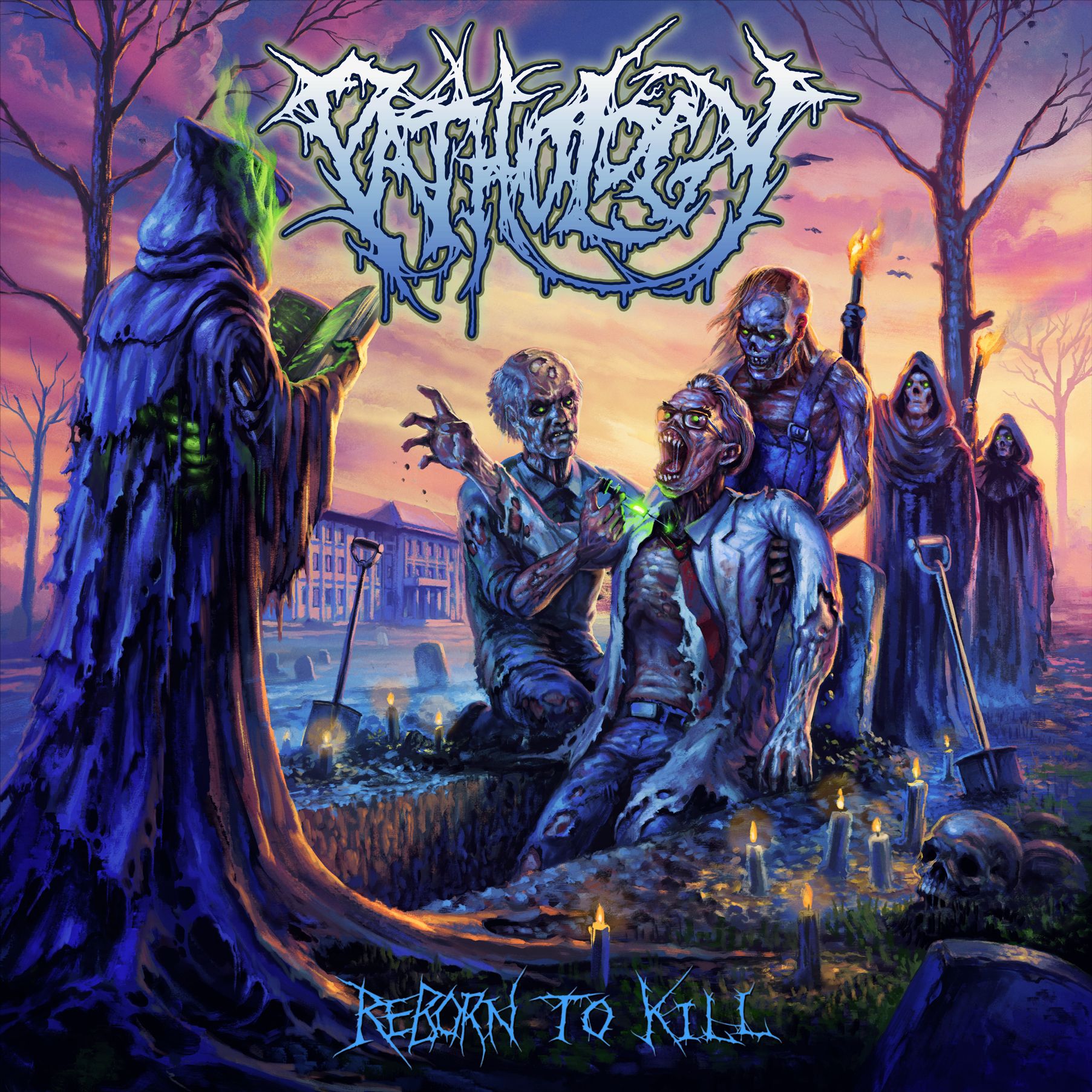 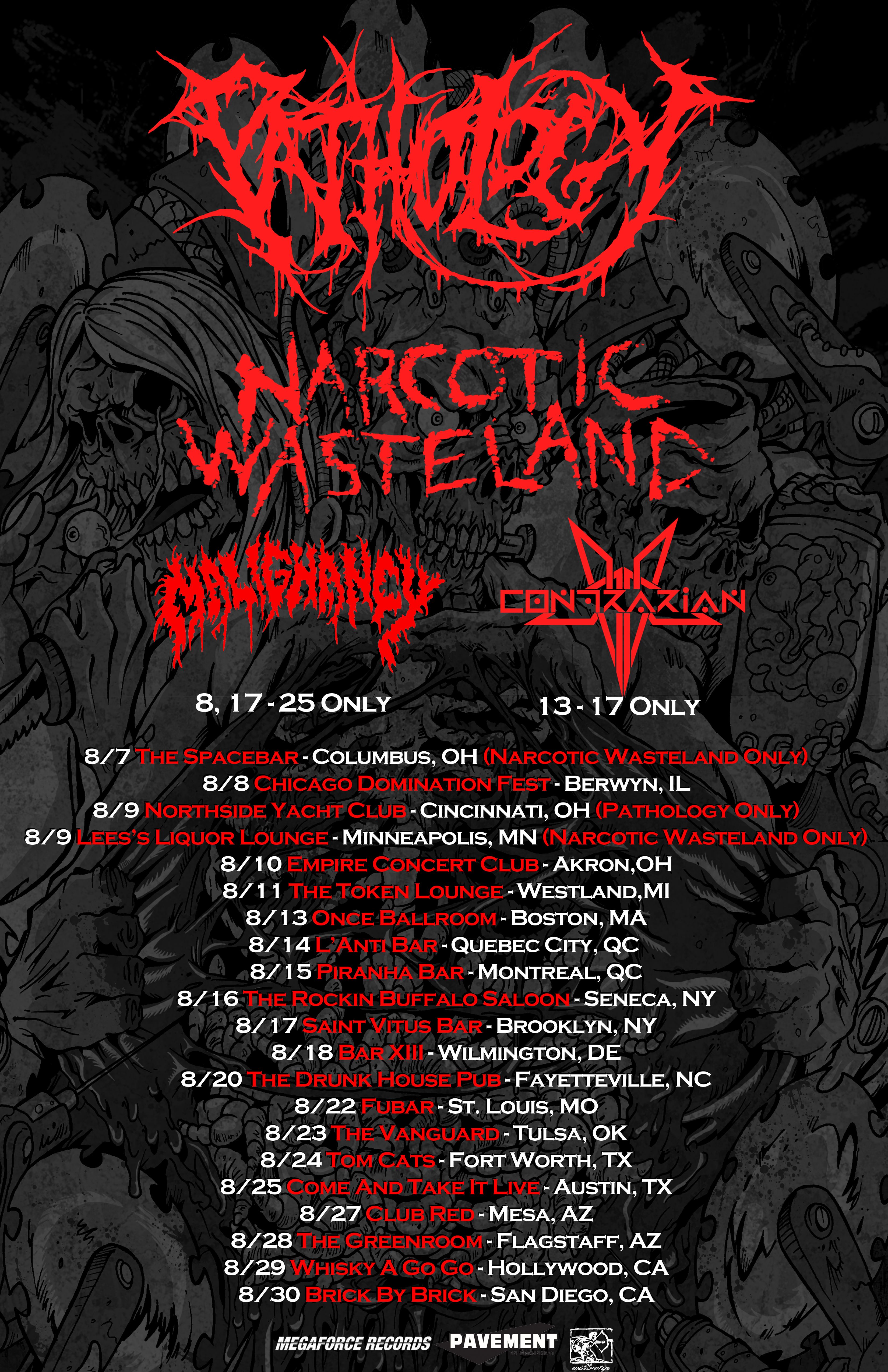 We will be hitting the road this spring for a west coast run. This will include The North West Terror Fest in Seattle and The Las Vegas Death Fest. Hope to see old and new fans at the shows. We will also be announcing a full US tour shortly. Stay tuned! 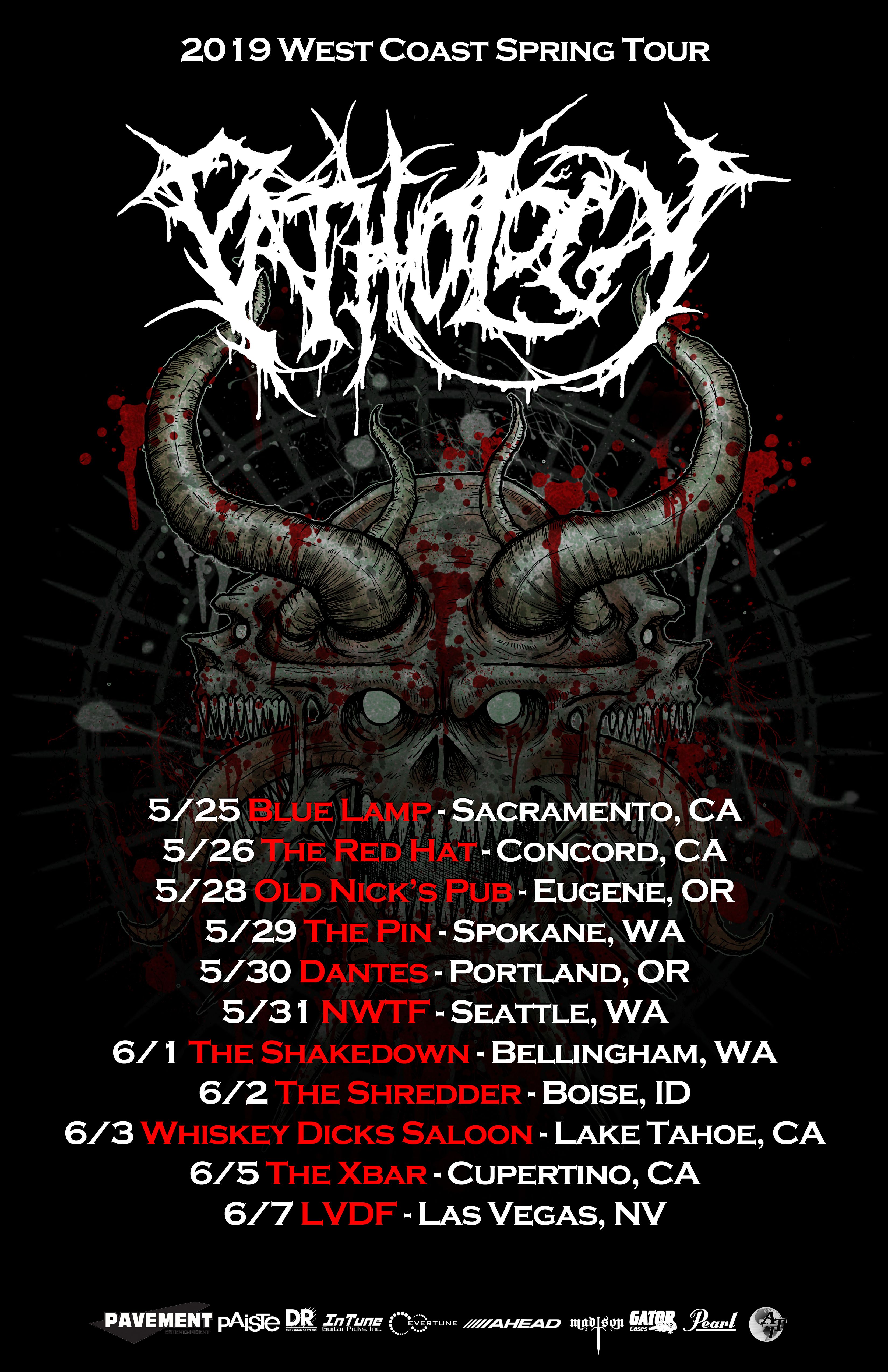 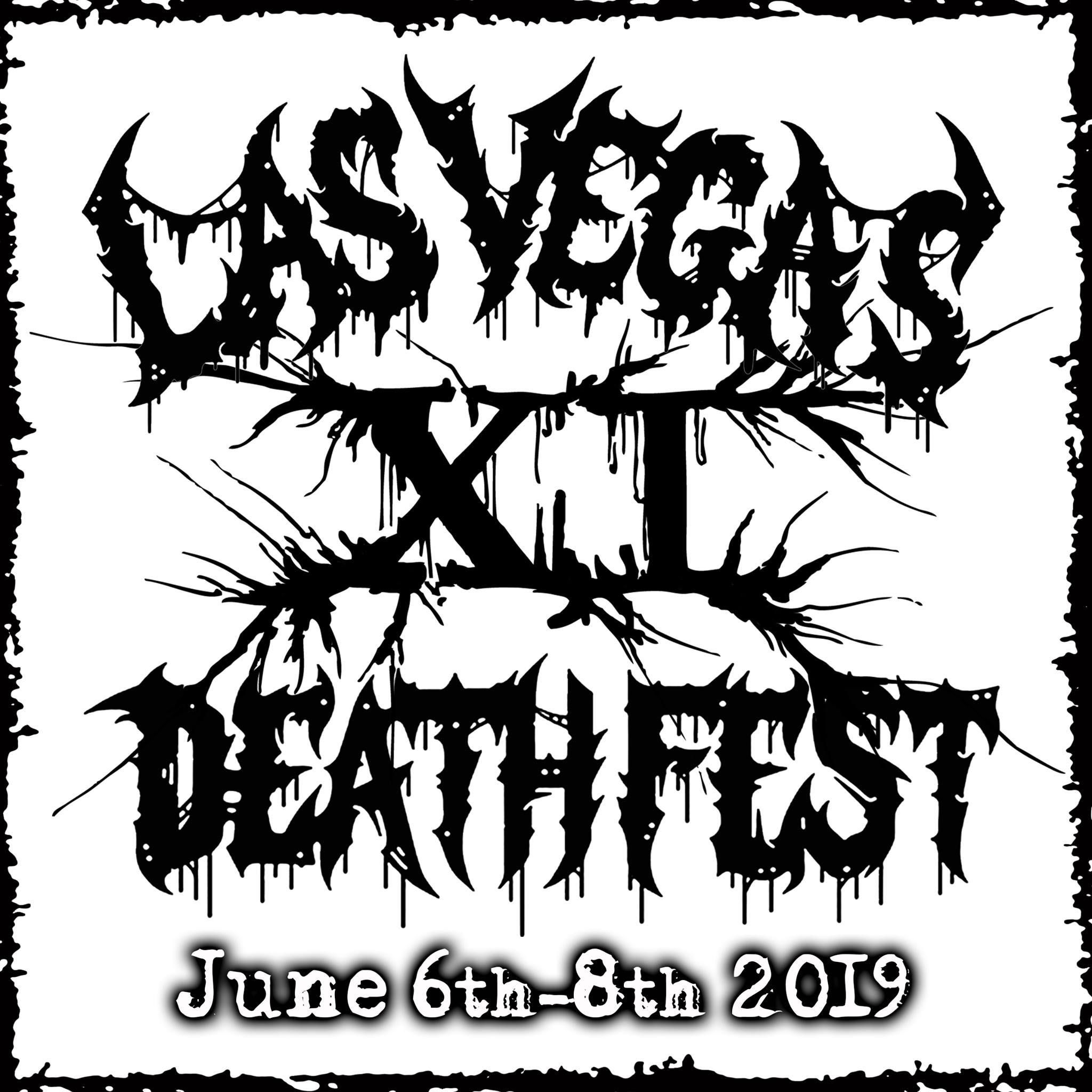 Pathology has been added to the 2019 Chicago Domination Fest 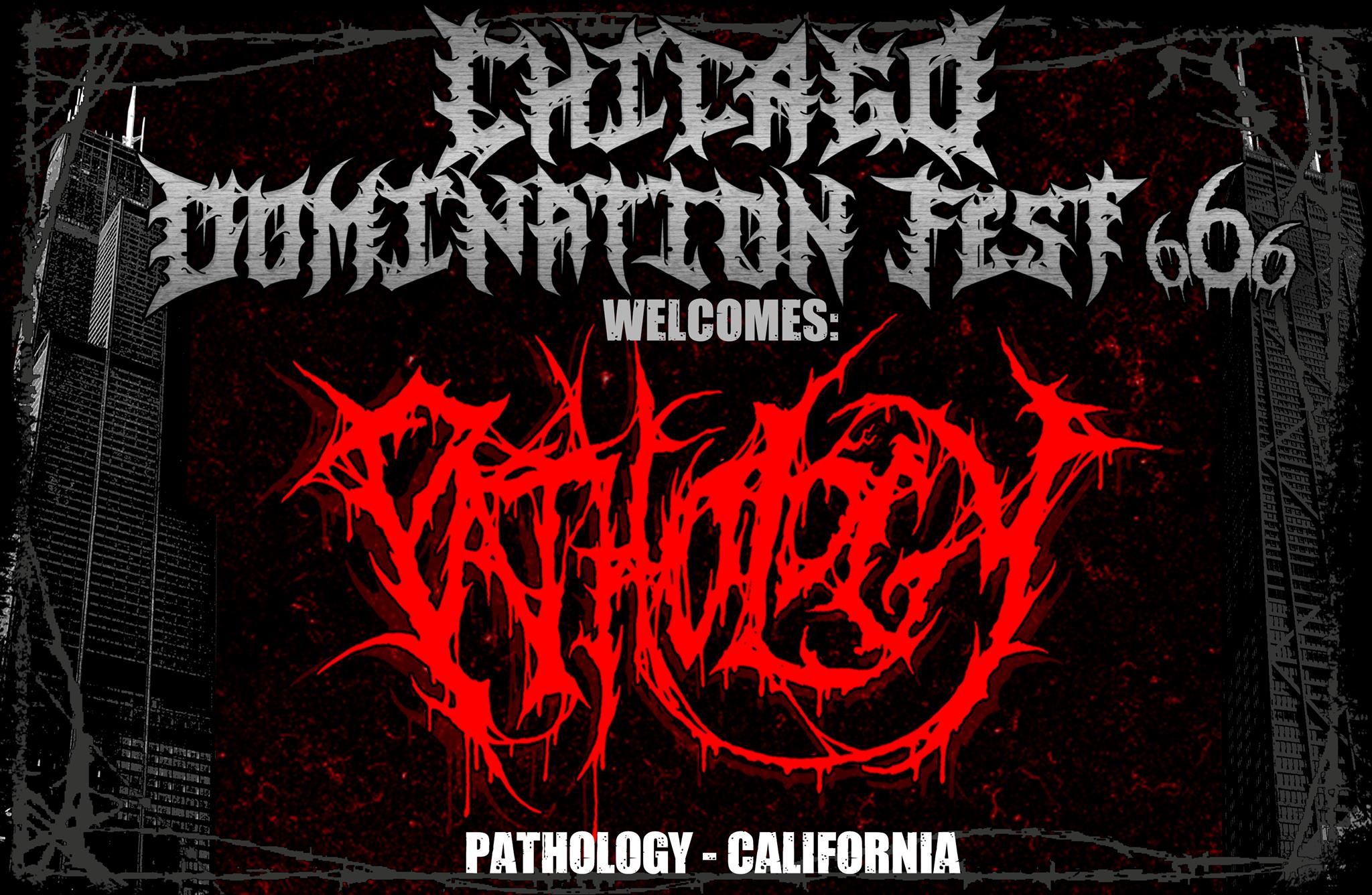 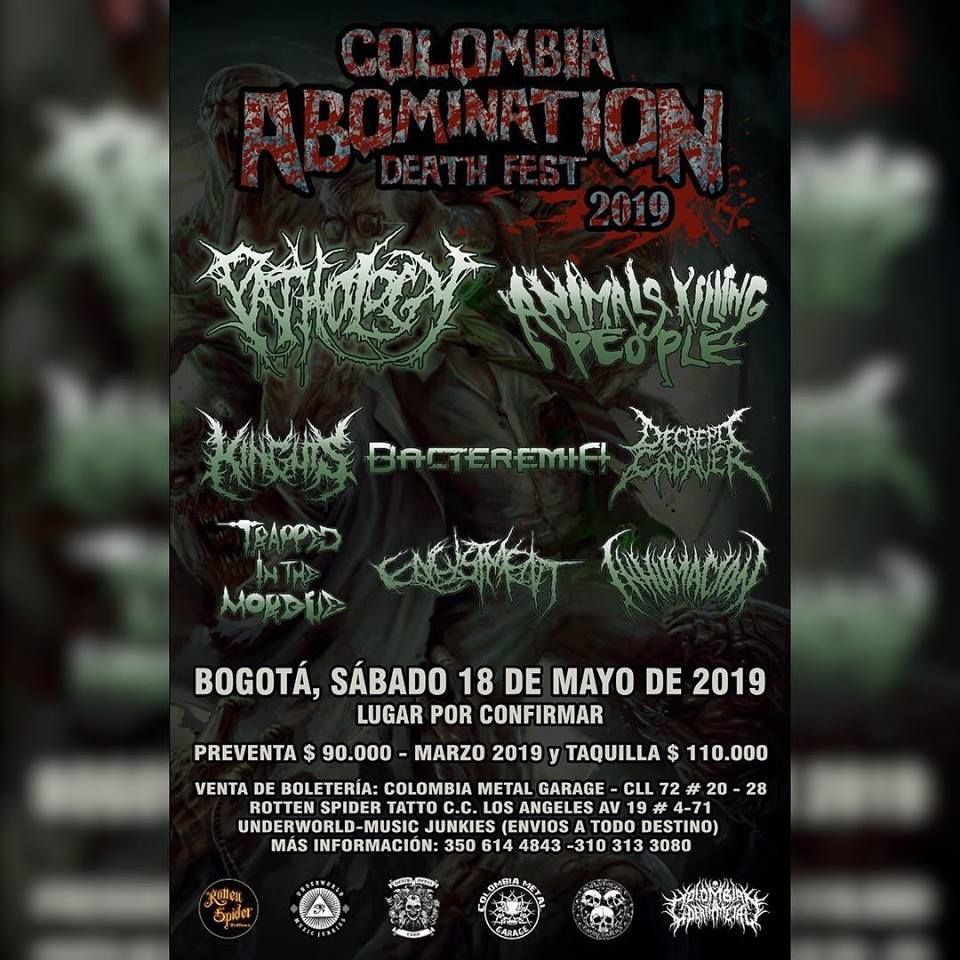 We will be heading to Europe in November with PYREXIA, EPICARDIECTOMY, KRAANIUM and SINAYA.

We have not been to Europe in 7 years, we are excited to return back and reconnect with old and new fans. See you soon! 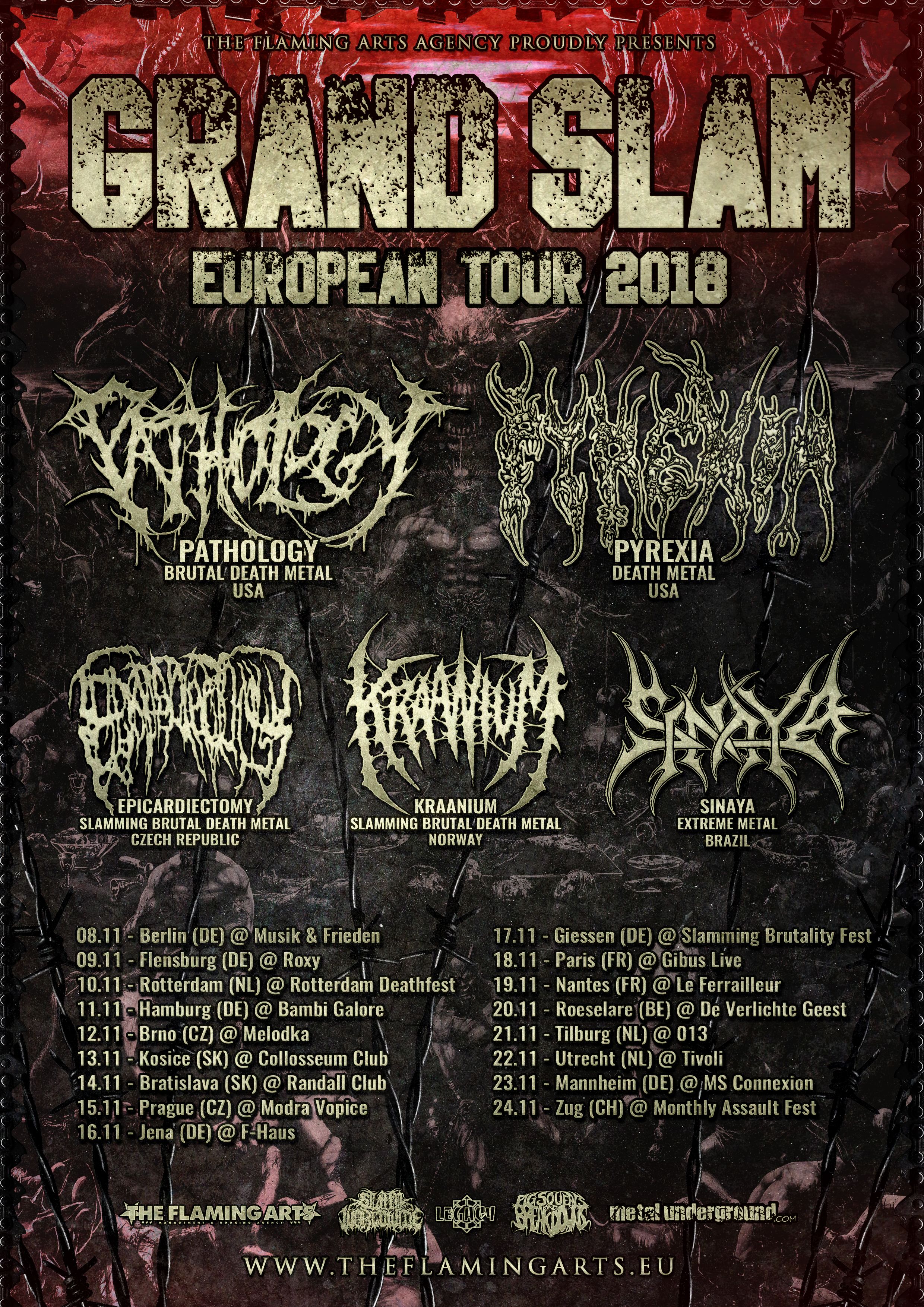 We will be on the road this August. This tour will also include Within Destruction and Parasitic Ejaculation. Mark your calendars